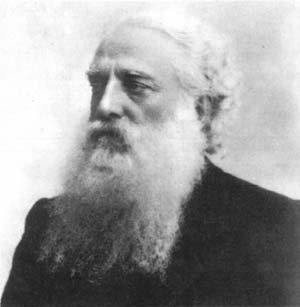 Colonel Henry Steel Olcott (2 August 1832 – 17 February 1907) was an American military officer, journalist, lawyer and the co-founder and first President of the Theosophical Society.

Olcott was the first well-known American of European ancestry to make a formal conversion to Buddhism. His subsequent actions as president of the Theosophical Society helped create a renaissance in the study of Buddhism. Olcott is considered a Buddhist modernist for his efforts in interpreting Buddhism through a Westernized lens.

Olcott was a major revivalist of Buddhism in Sri Lanka and he is still honored in Sri Lanka for these efforts. Olcott has been called by Sri Lankans "one of the heroes in the struggle of our independence and a pioneer of the present religious, national and cultural revival". Provided by Wikipedia
1