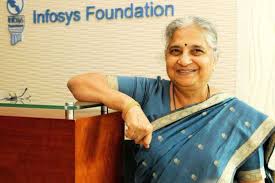 Sudha Murthy (née Kulkarni) is an Indian engineering teacher and Kannada and English author as well as a Social worker. She is also the Chairperson of the Infosys Foundation.She is the wife of co-founder of Infosys, N. R. Narayana Murthy.

Sudha Murthy began her professional career in computer science and engineering. She is the chairperson of the Infosys Foundation and a member of the public health care initiatives of the Gates Foundation. She has founded several orphanages, participated in rural development efforts, supported the movement to provide all Karnataka government schools with computer and library facilities, and established 'Murty Classical Library of India' at Harvard University. Murthy initiated a bold move to introduce computer and library facilities in all schools in Karnataka & taught computer science. She got "Best Teacher Award" in 1995 from Rotary Club at Bengaluru (erstwhile Bangalore). Murthy is best known for her social work and her contribution to literature in Kannada and English. ''Dollar Bahu'' (English: ''Dollar Daughter-in-Law''), a novel originally authored by her in Kannada and later translated into English as ''Dollar Bahu,'' was adapted as a televised dramatic series by Zee TV in 2001. Sudha Murthy has also acted in the Marathi film Pitruroon and the Kannada film Prarthana. She has also appeared in Kaun Banega Crorepati season 11 in its Karamveer episode of finale week. Provided by Wikipedia
1